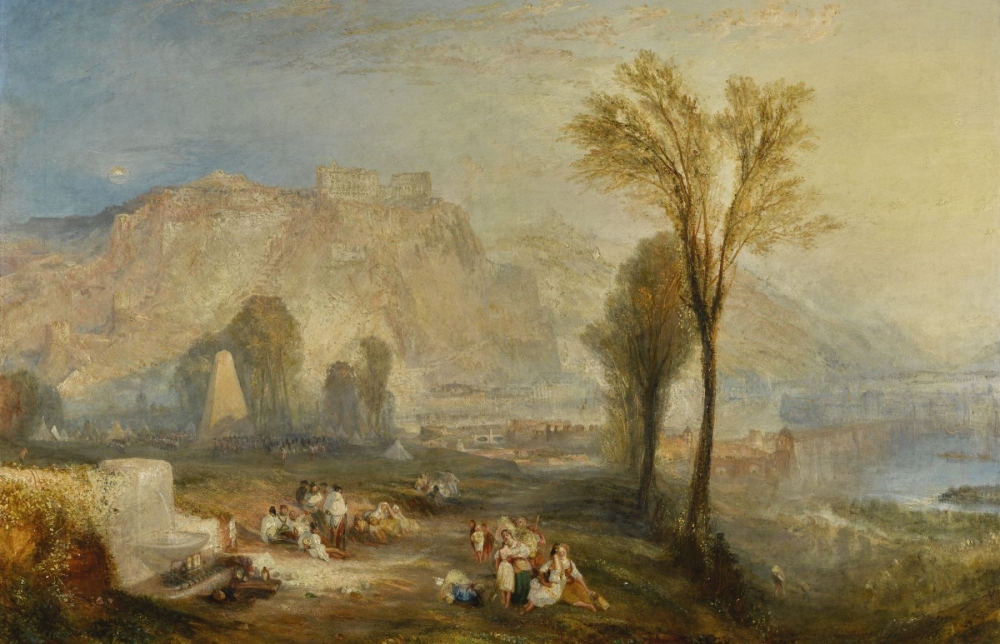 Sotheby’s and Christie’s assembled extremely respectable Old Masters sales this summer. The good news was the impressive sell-through rates at both houses (Sotheby's 85.3%, Christie's 75% by lot), even for material that had not just come out of some ancestral home. Also, despite talk about the shortage of supply, there were plenty of very good Old Masters of most schools on offer this year. It was reassuring that both top lots found buyers, reinforcing the well-worn adage that we live in a ‘Masterpiece Market’. However, one will never know if they would have sold for a higher price had they been offered privately.

Last year Sotheby’s and Christie’s combined to make a total of £81,853,600 in their evening sales, of which £44,882,500 could be attributed to Rubens’ Lot and his Daughters. This year the total was £97,113,000 with premium. So, everything points to a robust Old Master paintings market, even if it remains the poor relation to the Post War world. Sotheby’s started the week with an auction led by a much touted 1835 painting, Ehrenbreitstein by Turner (fig. 1), which had been on loan for many years at the Ashmolean Museum in Oxford. The seller had bought it at Sotheby’s for £70,000 in 1965, for many years the artist’s auction record. At that time, the seller was Wentworth Beaumont, 3rd Viscount Allendale whose father had bought it in 1942 (probably a rather good time to be buying art!). Last week it sold on the phone to the irrevocable bidder for a hammer price of £17,000,000, but it felt like a disappointing outcome. This is a magnificent painting, in excellent condition, which when seen in daylight has an ethereal, dream-like quality. That it was a German (not Italian) view and had numerous figures (not Turner’s strength) probably counted against it. No one would have described it as proto-Abstract-Expressionist, which is perhaps what the market now looks for in Turner. Nevertheless, it is a very fine picture and was well bought. 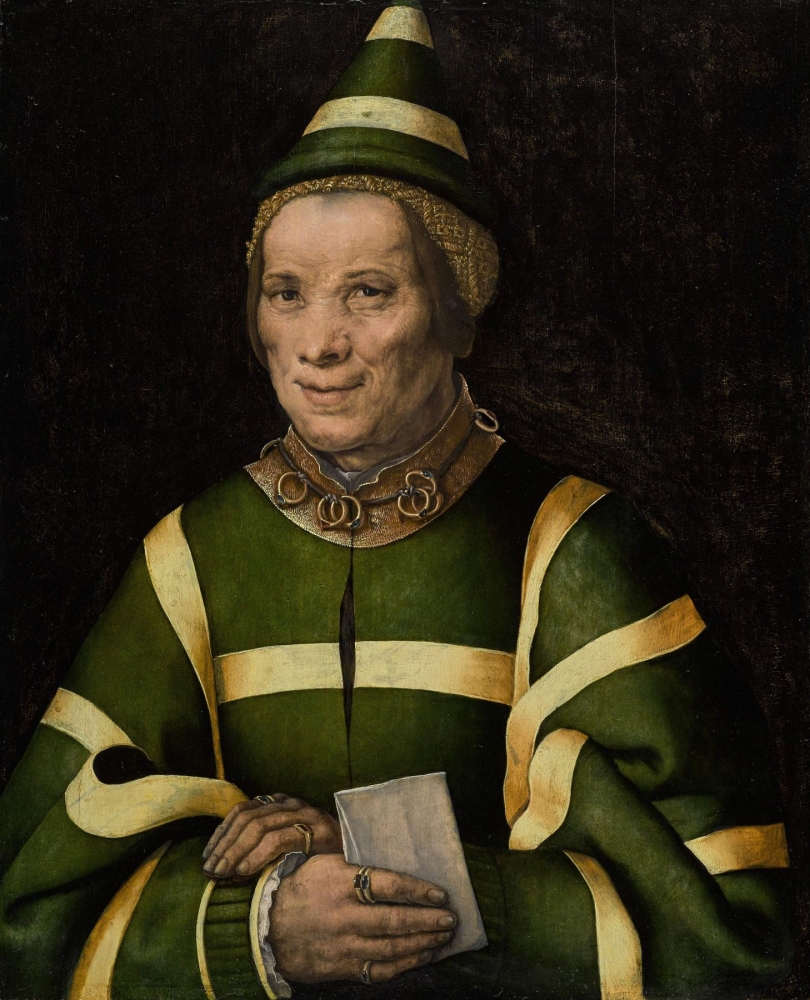 Alex Bell of Sotheby’s stressed the breadth and commitment of the buying base at their sale but, while over 85% sold, only 34 out of a total of 68 lots sold above the low end of the estimate. Three out of the four lots which more than doubled their low estimates were portraits; the fourth was by a follower of Bosch. What these pictures had in common was a type of modernism, either quirky or brutal, or both as in the case of the Portrait of Elisabet, Court Fool of Ann of Hungary by Jan van Hemessen (fig. 2) which sold for a hammer price of £1,800,000 against a low estimate of £400,000. A much more conventional, but nevertheless exquisite portrait of Barbara Schwarz by Christoph Amberger sold to the trade for a single bid of £650,000 against a low estimate of £800,000. It had been offered, unsuccessfully, at Christie’s in New York in 2014 for $4,000,000–£6,000,000.

Across Piccadilly, the next evening at Christie’s, the room was less full but the atmosphere felt better, buoyed by Jussi Pylkannen’s exuberant auctioneering style. There was more bidding in the room and, importantly, competitive bidding on the top lot (fig. 3), which turned into a stealthy war on the phones with bids rising in £250,000 increments tendered by two British Art specialists, John Stainton and Nick White. The latter gave the winning bid of £23,250,000. That single lot represented over 61% of the value of the whole sale. Painted as one of a pair, its pendant had been sold in 2011 by the rivals on Bond Street for £26,697,250 (with premium) at that time $42,708,768. The Christie’s picture sold for slightly less in sterling, £26,205,000 (with premium), but considerably less, $33,979,512, in U.S. dollars. Strange that American collectors were not there and taking advantage of the stronger dollar.

Three other lots at Christie’s made a hammer price of more than £1,000,000. One of them was a splendid Ordeal of St Sebastian by Van Dyck, very possibly the prime version of a painting in the Louvre. Bought by the same bidder as the Master of the Antwerp Adoration triptych, it was extremely good value at £1,600,000 plus premium. So was another rediscovery, a late Portrait of an Old Man attributed to Rembrandt, which sold on the phone against Johnny van Haeften for £1,750,000. Van Haeften has recently been accompanying a touring exhibition, in China, of a private collection which includes numerous examples by Rembrandt. Though in compromised condition, this is a low price if a consensus grows that it is indeed an autograph work by the great Dutch artist. 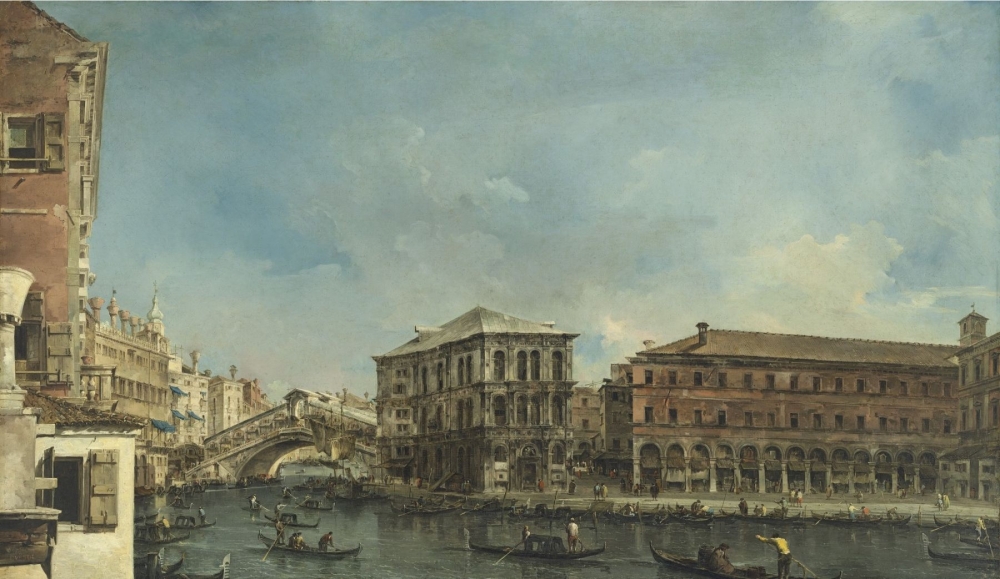 Conventional eighteenth-century art, especially view paintings, seems to have gone completely out of fashion unless it is in some way exceptional as was the Guardi at Christie's. A pair of unusually well-preserved early works by Canaletto (fig. 4), in uncleaned ‘country house’ condition failed to sell with a low estimate of £2,500,000. A view of San Giorgio Maggiore by Marieschi and a beautiful Panini Roman view also passed, while two Venetian views by Richter sold to one bidder below the low end of their estimate. Paintings by Amigoni and Boucher generated no interest. A sparkling copper by Solimena sold to the trade for £320,000 hammer, less than it made at Sotheby’s, New York in 1994. The Wright of Derby portrait (£2,000,000–£3,000,000) went unsold at Sotheby's while two Gainsborough portraits offered at Christie's were sold below estimate to a third-party guarantor.

An exception to this trend was the success of an irresistibly charming and animated little canvas, The Minuet by Giovanni Domenico Tiepolo (fig. 5), sold at Christie’s for an exceptionally strong hammer price of £2,600,000, which is considerably more than a work by his more famous father sold by the same collector the night before. The Minuet doubled its purchase price at Christie’s in 2007 of £1,308,500. 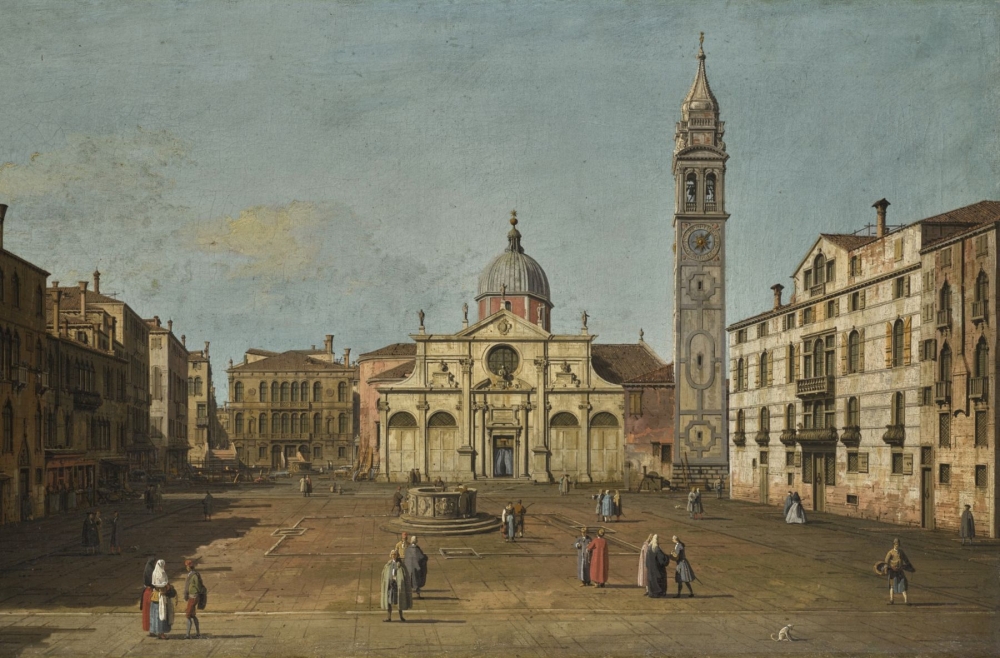 One of the challenges of both houses was to sell works that are reappearing on the market. For the most part, they succeeded but, as a result of their recent history, some of the prices achieved represented little, if no, increase on their previous purchase price: the Giovanni Battista Tiepolo Flora and the Murillo Ecce Homo, both sold at Sotheby’s, were cases in point.

The lessons? Great things sell (at a price); portraits (except British eighteenth-century portraits) are in; Flemish art (except Brueghel) is in; traditional Dutch art is out; and ‘furnishing paintings’ are out. The Old Master market is fairly thin and a small number of buyers make a big difference. So, things could quickly change if a few buyers with different interests see an upside in what is currently not in vogue.