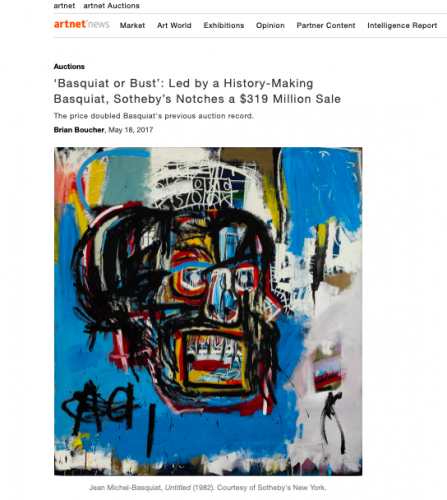 A Jean-Michel Basquiat painting rocketed to $110.5 million on Thursday night at Sotheby’s New York, smashing the artist’s previous record and carrying the house to a $319.2 million total. Thanks in large part to the Basquiat, the postwar and contemporary art auction outperformed its pre-sale estimate of $212–278.6 million. (Final sales prices reported by the auction house include the house’s premium; presale estimates do not.) Of the 50 lots in the sale, 48—or 96%—were sold.

Shortly after the sale ended, Japanese collector Yusaku Maezawa, founder of e-commerce giant Start Today and virtual mall ZOZOTOWN, announced via Instagram that he had bought the painting. He placed the winning bid through a Sotheby’s specialist after an 11-minute contest.

Auctioneer Oliver Barker opened the bidding at $57 million, and Sotheby’s Adam Chinn and a few discreet bidders in the room drove the painting up to $68 million over three and a half minutes. “Oohs” and “aahs” could be heard as a new bidder jumped in at $69 million. Before long, it became a head-to-head battle between Maezawa, bidding by phone, and the sole remaining bidder in the room, dealer Nicholas Maclean, a co-founder of the New York- and London-based gallery Eykyn Maclean.

The staggering $110.5 million price represented not only a record for Basquiat himself, but also a record for any work by an American artist at auction, and the second-highest price ever achieved for a contemporary work at auction.

The canvas reportedly came to the house from Lise Spiegel Wilks, the younger daughter of real-estate magnate Jerry Spiegel and his wife Emily. The work had been virtually unseen since it last appeared on the market in 1984. The buyer at the time paid just $19,000 for the work, which was made during the most coveted period of the artist’s short career.

Maezawa is no Basquiat neophyte. He set the artist’s previous record price in 2016, when he laid down $57.3 million for another 1982 work at Christie’s New York. Both paintings will eventually reside in a private museum Maezawa plans to build in his hometown of Chiba, Japan. “When I first encountered this painting, I was struck with so much excitement and gratitude for my love of art,” Maezawa wrote on Instagram. “I want to share that experience with as many people as possible.”

There were a few other major prices achieved. Roy Lichtenstein‘s Nude Sunbathing (1995) sold within estimate for $24 million (est. $20–30 million) after a minute-long contest between Sotheby’s contemporary art head Grégoire Billault and Amy Cappellazzo, chairman of Sotheby’s Fine Art division. But the Lichtenstein, like a number of the high-profile works in the sale, was guaranteed (either by third parties or the auction house itself), so its success was hardly a surprise.

Basquiat was not the only artist to set a record, either. New auction highs were notched for Jonas Wood, Wolfgang Tillmans, Mira Schendel, Blinky Palermo, and Takeo Yamaguchi.

The evening’s total presale estimate of $212–278.6 million is similar to that of Sotheby’s equivalent postwar and contemporary sale in May 2016. Without the Basquiat, however, the evening would have looked very different. If Sotheby’s had not secured the reportedly late consignment, the pre-sale estimate would have come in at $152 million—$50 million less than any of Sotheby’s May sales over the past five years.

According to sources familiar with the matter, the house, with support from outside parties, secured the Basquiat late in the consignment process with a guarantee, which buoyed the low estimate into vastly more presentable territory. (A Sotheby’s spokesperson declined to comment on when the work was consigned, but noted that half the lots in tonight’s sale sold above their high estimates.)

The sale followed a challenging night for the house on Tuesday, when the cover lot of its Impressionist and Modern sale, an Egon Schiele estimated at $30–40 million, was withdrawn just before the auction began. As Nicholas Hall, a Christie’s veteran who recently opened his own gallery on the Upper East Side, noted, Thursday’s sale was truly “Basquiat or bust.”