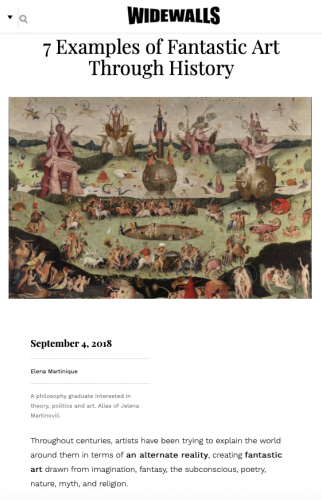 Throughout centuries, artists have been trying to explain the world around them in terms of an alternate reality, creating fantastic art drawn from imagination, fantasy, the subconscious, poetry, nature, myth, and religion.

Let’s take a look at the list of seven fantastic art pieces that will be on view as part as the exhibition Endless Engima.

Titian - Salome with the Head of Saint John the Baptist

The greatest painter of 16th-century Venice, Tiziano Vecellio known as Titian experimented with many different styles of painting, embodying the development of art during his epoch. Recognized by his contemporaries as “The Sun Amidst Small Stars”, he profoundly influences not only painters of the Italian Renaissance, but also future generations of Western art.

Created around 1515, the painting Salome with the Head of Saint John the Baptist reinterprets the legend of Salome and her mother’s hatred of John for his preaching against her. It has been suggested that the head of John the Baptist might be a self-portrait and that Titian was alluding to his private life with the model, which is believed is the same used in the work Dresden Venus.

An American artist, Lisa Yuskavage is widely associated with a re-emergence of the figurative in contemporary painting. She is best known for seemingly ignoble subjects depicted with classic, historical techniques. Her exquisitely painted canvases are often visually paradoxical.

Created in 1995, the work Rorschach Blot features the strange and haunting figure placed against the bright yellow background which speaks of sunshine and sweetness. The position of the figure creates a sinister echo of the world of the child and the circus within this highly sexualized context, blurring the lines between human and inanimate.

Raymond Pettibon - No Title (And Such Complicated…)

An American illustrator and cartoonist, Raymond Pettibon is known for his comic-like drawings which convey intelligently disturbing, ironic messages. Using ink and paper, he creates works which are always rebellious against the system. Many of his works are featured on a range of album covers.

In the early 1990s, Pettibon created a spectacular series of Gothic cathedrals. The work No Title (And such complicated…)from 2014 evokes this series, with its experimentation with color and line and text so small as to be barely visible.

Created in 1987, the work Hope Until Death is a surrealistic tableau featuring a centrally placed three-eyed female head and a range of characters from popular culture.

Contemporary follower of Hieronymus Bosch - The Garden of Earthly Delights

One of the most notable apocalyptic painters of the world and one of art’s first visionary geniuses, Hieronymus Bosch is celebrated for his detailed and symbolic narratives in biblical-themes fantasy landscapes populated by fantastical, and often macabre creatures.

Bosch’s fantastical scenes remained enormously popular throughout Europe in the sixteenth century. One of his contemporary followers rendered his celebrated painting The Garden of Earthly Delights. Intricate in its symbols, it depicts themes addressing history and faith.

An Italian Renaissance painter, Giuseppe Arcimboldo is known for his intricate paintings, which combined inanimate or found objects into kaleidoscopic “composite heads”. His portraits of human heads made up of vegetables, fruit and tree roots, were greatly admired by his contemporaries and remain a source of fascination today.

The work A Reversible Anthropomorphic Portrait of a Man Composed of Fruit is one of his most famous works. It is still debated among art critics if these works were whimsical and full of riddles or the fantasy product of a deranged mind.

A Florentine painter of the Italian Renaissance, Piero di Cosimo is most famous for the mythological and allegorical subjects he painted in the late Quattrocento. He combined the straightforward realism of his figures with an often whimsical treatment of his subjects, creating the distinctive mood in his works.

The work The Finding of Vulcan on the Island of Lemnos depicts a story of Vulcan, the god of fire and the blacksmith in Roman mythology. When he was thrown down from Olympus by his father Jupiter, he landed on the island of Lemnos in the Aegean where he was looked after by the inhabitants. In the work, he is shown being helped to his feet by nymphs.