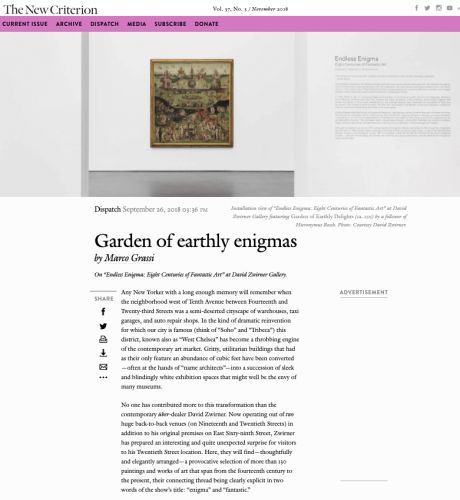 Any New Yorker with a long enough memory will remember when the neighborhood west of Tenth Avenue between Fourteenth and Twenty-third Streets was a semi-deserted cityscape of warehouses, taxi garages, and auto repair shops. In the kind of dramatic reinvention for which our city is famous (think of “Soho” and “Tribeca”) this district, known also as “West Chelsea” has become a throbbing engine of the contemporary art market. Gritty, utilitarian buildings that had as their only feature an abundance of cubic feet have been converted—often at the hands of “name architects”—into a succession of sleek and blindingly white exhibition spaces that might well be the envy of many museums.

No one has contributed more to this transformation than the contemporary über-dealer David Zwirner. Now operating out of two huge back-to-back venues (on Nineteenth and Twentieth Streets) in addition to his original premises on East Sixty-ninth Street, Zwirner has prepared an interesting and quite unexpected surprise for visitors to his Twentieth Street location. Here, they will find—thoughtfully and elegantly arranged—a provocative selection of more than 130 paintings and works of art that span from the fourteenth century to the present, their connecting thread being clearly explicit in two words of the show’s title: “enigma” and “fantastic.”

This rich serving of mostly Western image making was selected by Nicholas Hall, a distinguished connoisseur and dealer of European paintings, whose own gallery is at 17 East Seventy-sixth Street. He collaborated with David Leiber, a director of the Zwirner Gallery, and they are to be commended not only for obtaining on loan a number of celebrated items, but also for ferreting out from deep in the “woodwork” lesser-known pieces of equal distinction. There are a number of bona fide masterpieces, thus bowing to our contemporary obsession with fame and the superlative. The star in this category is, hands down, a monumental depiction of Herodias (or Salome) proffering the severed head of her victim on a silver trencher by Titian (yes, Titian). A bound and illustrated booklet prepared by the emeritus Cambridge scholar Paul Joannides is available to allay any skepticism of the attribution. But more importantly, there is the picture itself, fresh from a judicious recent conservation campaign and now dominating its space with the unmistakable gravitas of the great Renaissance master.

Were it not for the rare pleasure of savoring up-close such a distinguished work, its presence in this “enigma” context might ostensibly derail the show’s narrative. In fact, the message conveyed by the image could not be less enigmatic or more explicit: in effect, in today’s terms, it is virtually a perfect #MeToo poster. If the Titian thus misses the intended thematic profile of the exhibition, there are some further 130 works that sharply define and amplify Hall’s brief. According to his introductory notes, these works “explore the ways in which artists have sought to explain their world in terms of an alternative reality drawn from imaginations, the subconscious, poetry, nature, myth, and religion.”

The large and intriguing Garden of Earthly Delights (ca. 1515) by a contemporary follower of Hieronymus Bosch quite appropriately serves as the show’s “title page,” greeting the visitor upon entering the gallery with its bizarre and whimsical world depicted as an imaginary fantasyland. The viewer easily loses himself in a sulphurous landscape teeming with lithe, joyful nudes cavorting among scores of gnomic creatures; it is decidedly enigmatic, but humorously non-threatening. Beyond this cheerful welcoming introduction, there are images that elicit far darker emotions. One of the most harrowing is an over-life-sized depiction of an old, screeching harridan simply titled The Witch(ca. 1645).She is completely nude, on her knees and gesticulating wildly. Only a leafy branch extending over her groin denotes the artist’s (Salvator Rosa) seventeenth-century sense of propriety. Otherwise, the vision is starkly and arrestingly modern, à la Francis Bacon using a different palette.

Not surprisingly, James Ensor never fails to unsettle. His work included here, Skeletons Warming Themselves (1889),is, at the same time, a witty scherzo and a grim memento mori: can there be warmth in death?—hardly a question that Giorgio de Chirico posed himself in 1927 when painting L’Archeologo. Here, there is no beginning or end to life; the anthropomorphic sculptural figure is derived from a combination of classical prototypes now frozen in time and space by its creator. Again, as with the Titian, the thematic justification for the picture’s inclusion seems tenuous. On the other hand, we benefit from being able to admire an absolute and seldom-seen masterwork. The harsh calligraphy of de Chirico’s highly prized, earlier, “metaphysical” period is here replaced by a sumptuous, feathered brushwork that recalls Savinio, the artist’s brother. More importantly, the painting long predates the sloppy, “neo-Baroque” concoctions that de Chirico churned out in the post-war decades, presumably to pay the rent.

This important exhibition will benefit from a fully illustrated scholarly catalogue with essays by, among other specialists, J. Patrice Marandel, Olivier Berggruen, and Dawn Ades. There will also be a symposium on “Fantastic Art,” organized by Nicholas Hall and Yuan Fang, at The Kitchen (across the street from Zwirner Gallery on Nineteenth Street) on October 27.

Marco Grassi is a private paintings conservator and dealer in New York.