On Sunday, March 8, the Exhibition, Hans Baldung Grien: Heilig | Unheilig (Hans Baldung Grien: Sacred | Profane) was closing at the Staatliche Kunsthalle Karlsruhe. It was the first monographic exhibition on the artist to take place for sixty years, when Karlsruhe hosted the last such exhibition. As exhibitors at TEFAF Maastricht, we took the opportunity to see it before the opening of the fair. Little did we know, as we squeezed into a small rented car and headed for the autobahn to Karlsruhe how our world would change in the next three weeks. When we arrived at Karlsruhe we got a hint of what was coming: the streets were deserted, the beerhalls and restaurants half-empty. Nevertheless, there was an orderly line to see the exhibition, which was packed. No social distancing. This was an exhibition the like of which we will probably not see again in our lifetime. It comprised of 250 objects, drawings, prints, paintings and stained glass windows by Baldung and his contemporaries, including Albrecht Dürer, comparison to whom was an important leitmotif of the show. 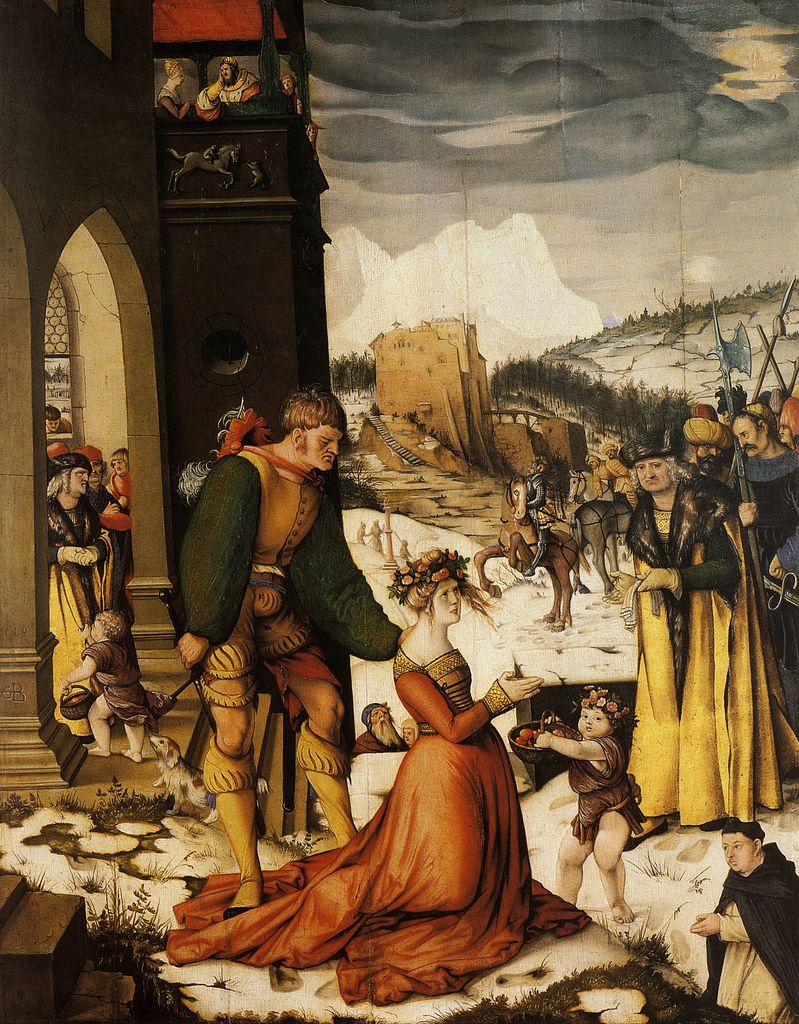 Hans Baldung (1484-1545), eventually known as Hans Baldung Grien (Grien = “green”, and was maybe added to distinguish him from two other Hanses in Durer’s workshop) is one of a small group of German renaissance artists to establish himself as a master of international repute, along with Albrecht Dürer, Lucas Cranach the Elder, Albrecht Altdorfer and Mattias Grünewald. He was a student, collaborator and close friend of the presiding German genius, Albrecht Dürer who sent him a lock of his own hair, included in the exhibition, as a testament to their friendship. Like Dürer, though even more so, one can debate whether Baldung’s real artistic contribution was as a draughtsman and printmaker rather than as a painter. Certainly Baldung’s paintings show a love of line and design which is as graphic as it is painterly, but perhaps his paintings underline Baldung’s eccentricity as an artist more than his drawings and prints, which though different from Durer’s, exhibit in their delicacy of touch, the exquisite use of white highlights on colored paper, a formal grounding in the basics which he throws overboard when painting. Having said that, paintings such as the delicate and intensely moving 1516 snowscaped Martyrdom of St Dorothy (Národní Galerie, Prague) (fig 1), the shy 1517 Portrait of Count Palatine Philip (Alte Pinakothek, Munich) and the surreal 1533 Nativity (Staatliche Kunsthalle Karlsruhe) all show how Baldung could excel as a painter in a variety of relatively conventional genres. 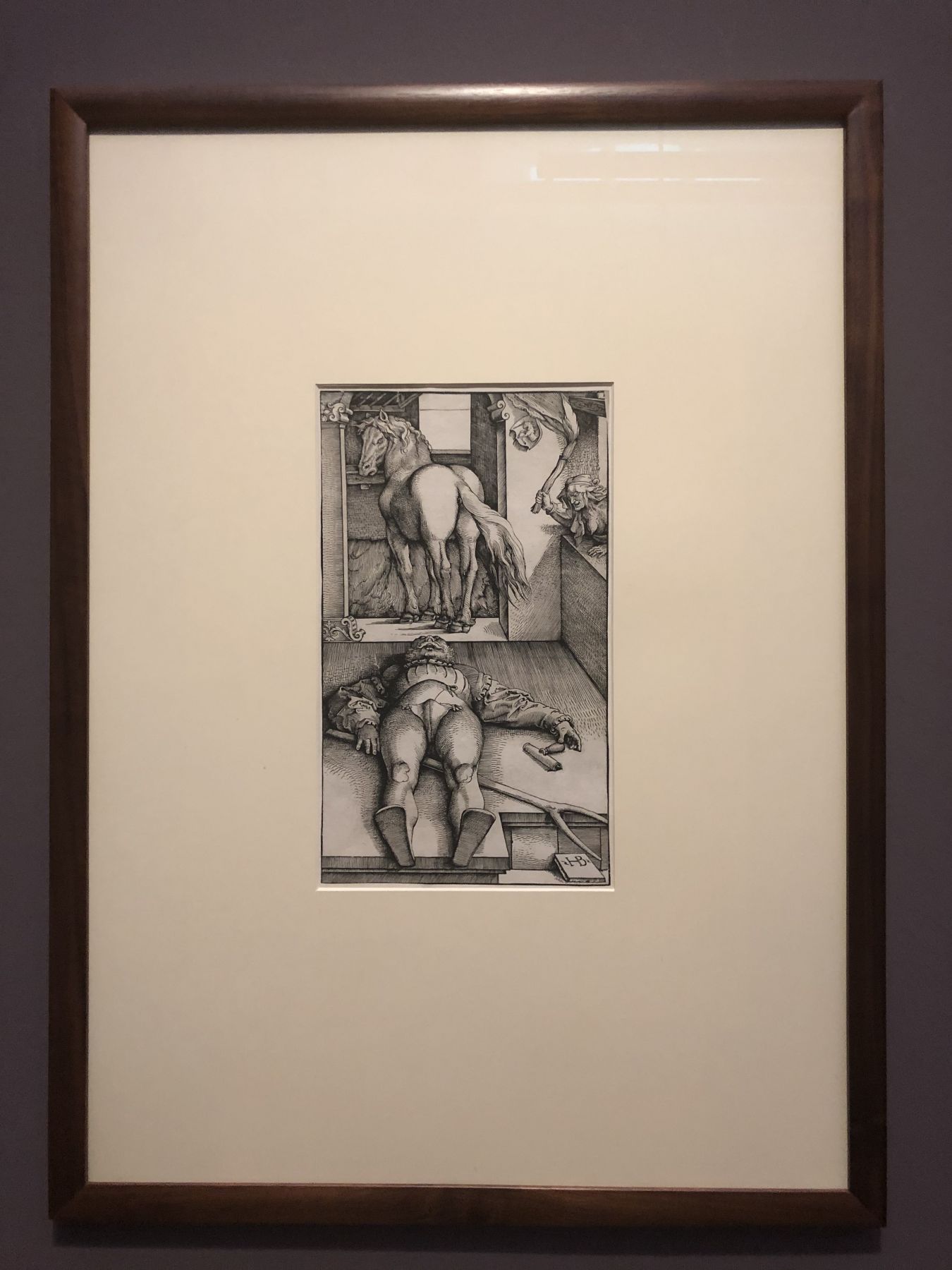 The most celebrated and extraordinary group of works by Baldung, and for their quality, erotic power and bizarre originality unmatched in Renaissance Europe, are the series of drawings, prints and paintings devoted to witches, the supernatural and Death and the Maiden. In 1936, Alfred Barr included the mysterious Bewitched Groom (fig 2) and the Witches’ Sabbath in his landmark exhibition, Fantastic Art, Dada, Surrealism. Probably the first and last time works by Baldung were shown at the Museum of Modern Art. Karlsruhe’s own magnificent impression of the Bewitched Groom, as rich and fresh as the day it was printed, is the emphatic full stop at the end of this show. Other German renaissance painters, notably Lucas Cranach the Elder, brought a complex agenda to the depiction of women: at once sensual, mischievous, frightening, determined, victims and destroyers of men. Hence the proliferation of his portrayals of Eve, Judith, Salome, Venus and Lucretia to name a few. But Baldung pushes the envelope a lot further. His drawings of witches (three in the Albertina, Vienna and one in the Staatliche Kunsthalle, Kupferstichkabinett, Karlsruhe, fig 3), one of which was produced as a New Years present for the chaplain of a monastery, are erotic bordering on pornographic with their sensual depiction of voluptuous young women cavorting with dragons or each other. There is a playfulness to these drawings which doesn’t seem to betray misogyny, or at any rate a fear of female sexuality, which underlay much of the obsession with witchcraft. Baldung’s interest in witches may have been piqued by such treatises as the 1487 Malleus Maleficarum written by the inquisitors Kramer and Spranger, and the 1489 De Lamiis et Phithonicis Mulieribus by Ulrich Molitor, and his technically revolutionary chiaroscuro woodcut The 1510 Witches’ Sabbath is in the same vein as Dürer’s print made ten years earlier, but his drawings of the subject seem to be more tongue in cheek. 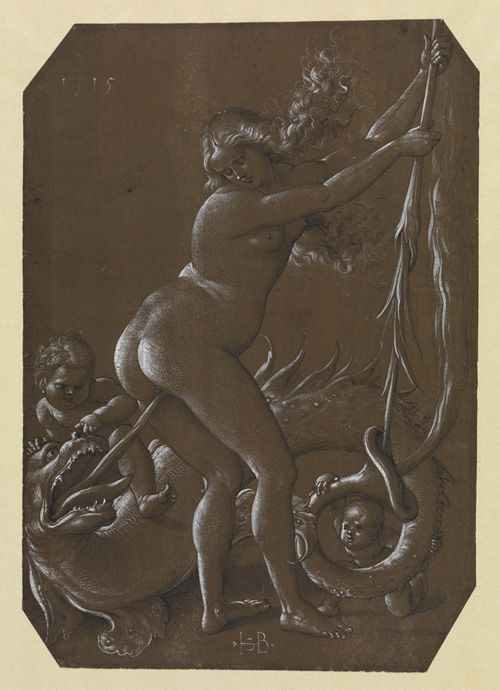 Related to these lustful depictions of young witches is a series of small paintings of Death and the Maiden, measuring around 30 x 16 cm, one from the Bargello, Florence (of all places!), and two from the Kunstmuseum, Basel (fig 4). They were all painted between 1513 and the mid-1520s. Each shows a voluptuous young woman being grabbed and groped by the desiccated, cadaverous figure of Death. Baldung delights in the frontal depiction of the somewhat statuesque female nude, striking poses altogether more classical than the earlier witch drawings but we still see the enduring fascination for Baldung of the battle between vice and virtue, age and youth. 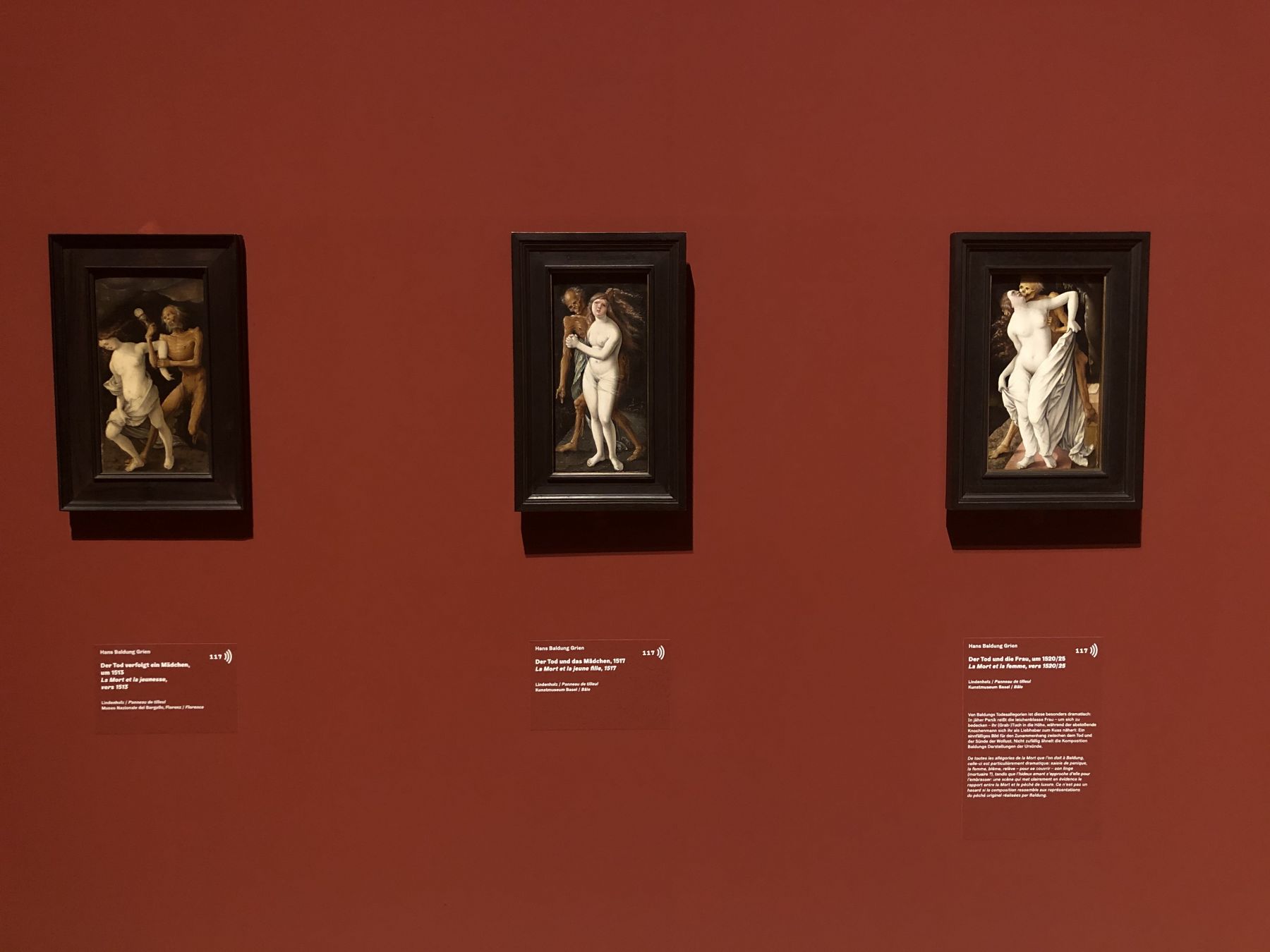 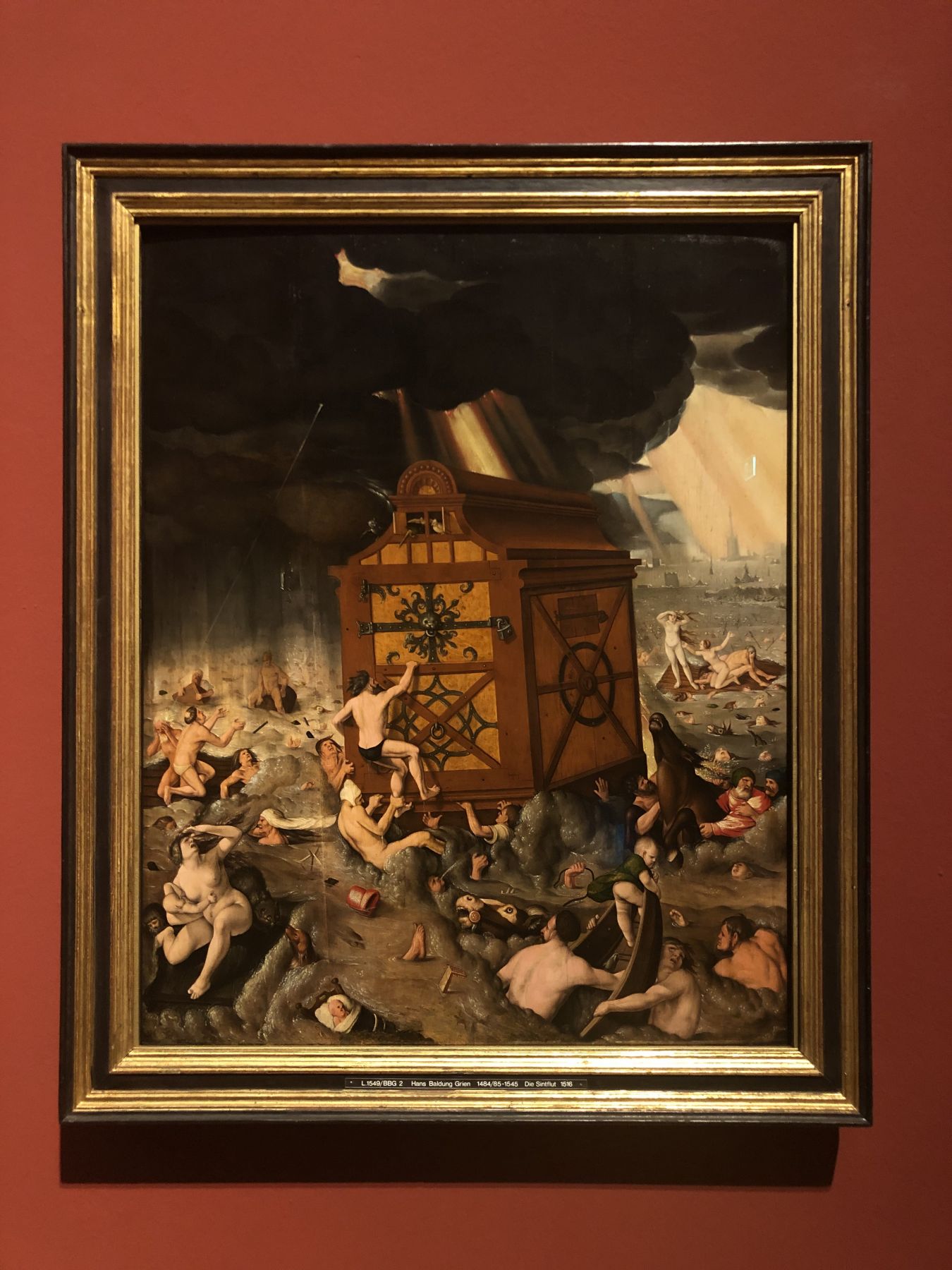 We also see Baldung as a painter who employs violent contrasts in light and shade. The gleaming white bodies of the young women in this sequence of paintings echo the unearthly white flesh tones of the Virgin in his Holy Families (Nurenberg; Potsdam; Strasburg) and his Nativities (Karlsruhe; Frankfurt) and his Adam and Eve (Madrid, Thyssen-Bornemisza Museum). His Madonnas, with their pale faces, small eyes and cherry-red mouths look like beauties in an eighteenth-century Japanese woodcut; Baldung, like Cranach, may well have been expressing a German ideal of pale-skinned feminine beauty. And, marmoreal as these figures may seem, Baldung employs these heightened chromatic contrasts for a different purpose than to emulate sculpture or to show an awareness of the world of classical antiquity, even if that may be present. Baldung is constantly striving for dramatic effect, be it in intrinsically melodramatic subjects like Hercules and Antaeus or The Flood (fig 5) or in more placid, domestic scenes like a Nativity. And this pursuit of drama takes Baldung from the ordered, humanist world of the ideal into a heightened, surreal realm of the otherworldly and supernatural. 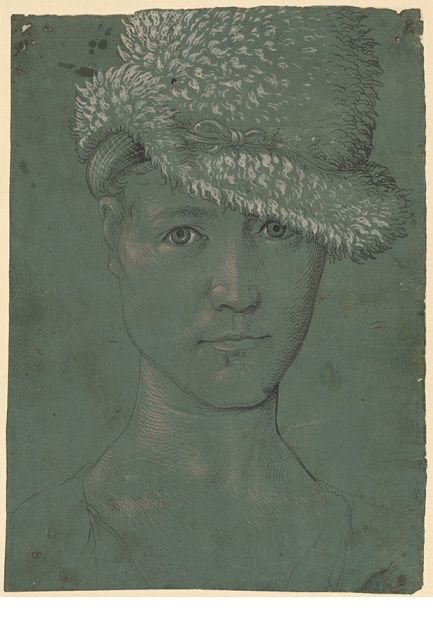 This is underlined by one of the most intriguing sub-plots in this exhibition which is to point out the difference in approach between that of Dürer and of Baldung. The extraordinarily precocious and arresting Self-Portrait drawing at the entrance to the exhibition (fig 6) invites comparison with Dürer’s many self-portraits, notably that of him as a thirteen year-old. But in prints, drawings and even paintings, where Dürer feels the tug of antiquity, the neo-platonic ideal and the world of renaissance Italy, Baldung draws from nature and is drawn to the eccentric world of Germany, its forest landscapes, its snow, mountains and monsters. Nowhere is this contrast made more clear than in the two artists’ widely different approach to the portrayal of St Jerome in a Landscape. For Dürer, the idealized, muscular figure of the male saint dominates in the foreground (fig 7), while Baldung, fifteen years later, places him in the middle distance, dwarfed by a rushing torrent, mountains and trees dramatically angled, out of kilter, on a rocky outcrop (fig 8). 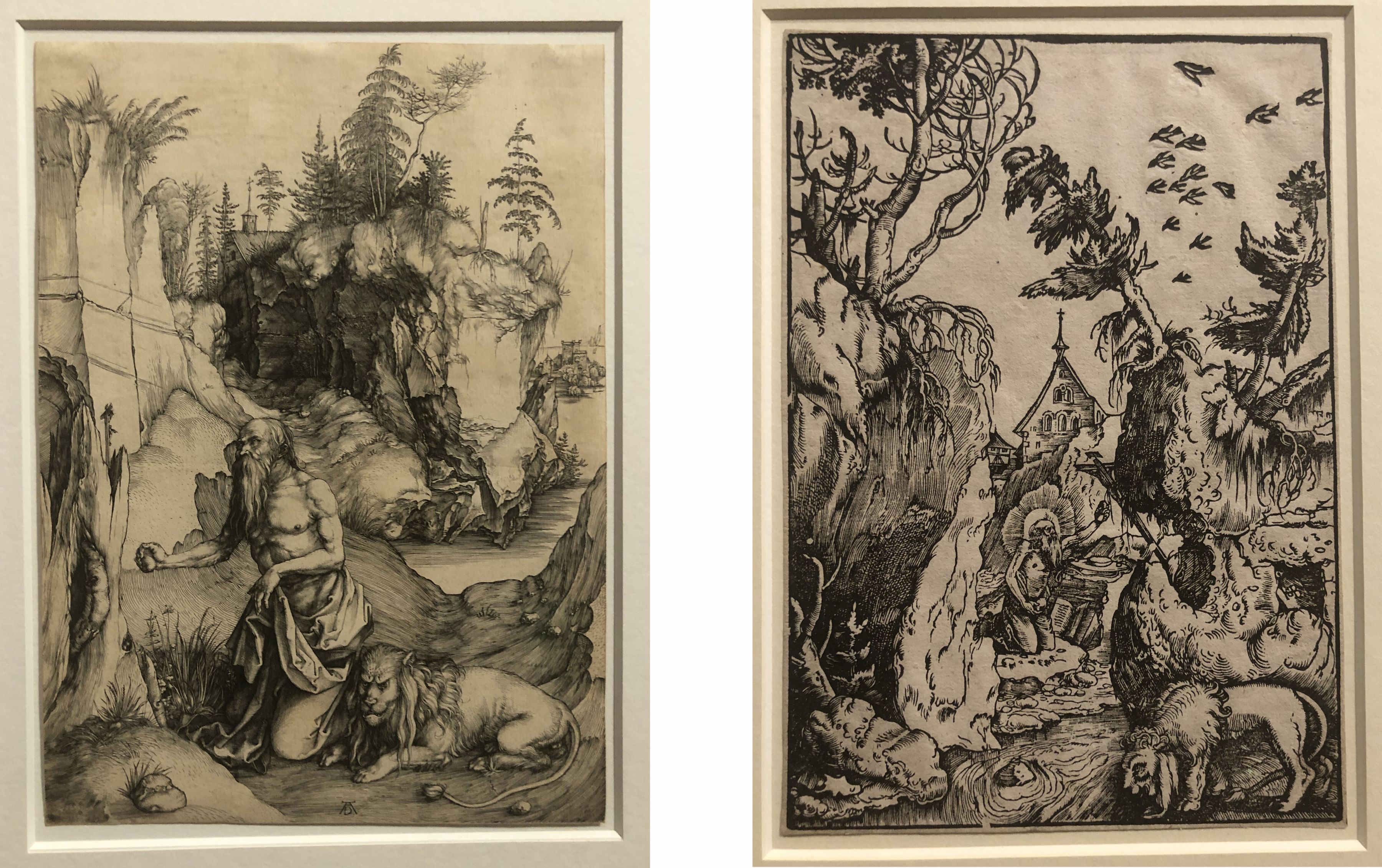 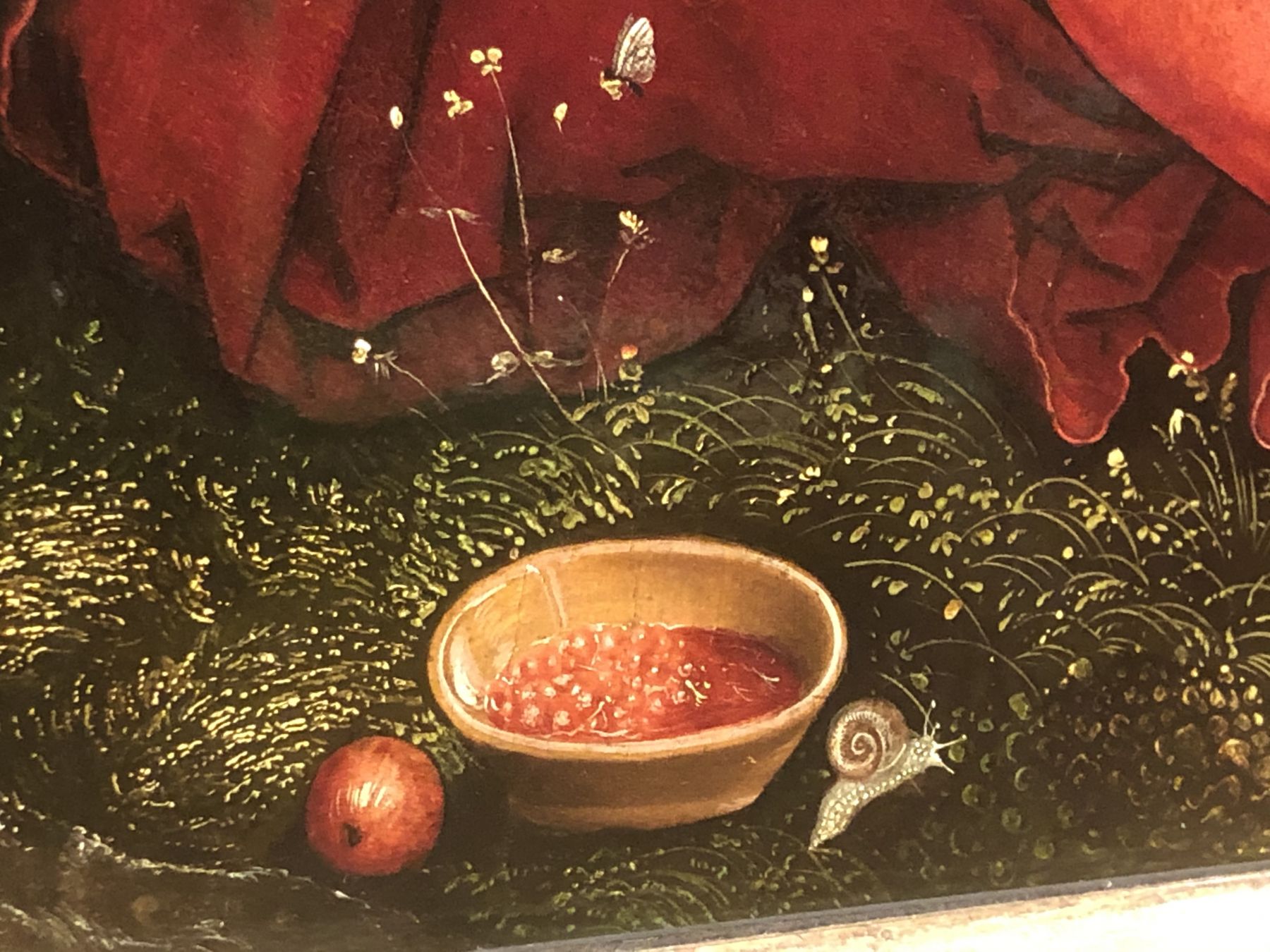 This exhibition has many delightful surprises. I did not expect to see the gentle scene of familial bliss of the Rest on the Flight to a very mountainous Egypt, with miraculous water springing from a brilliant bright green knoll complete with a bowl of wild strawberries (Akedemie der bildenden Künst, Vienna) (fig 9) or the proto Zurbarán-like Catholicism of the Madonna as the Queen of Heaven (Private collection, U.S.A.) (fig 10). The stylish eccentricity of Baldung’s portraiture showed the artist’s versatility. His sitters are not like those of Titian or Dürer: all power, wealth and self-assurance. They have darting eyes which, when they engage the audience do so with caution or distrust. Unfortunately, like a number of the other paintings in this exhibition, condition is an issue but where, as in the Munich Portrait of the Count Palatine, Philip they are well-preserved one can see how subtle and inquisitive Baldung was as a portraitist, even of important court figures. 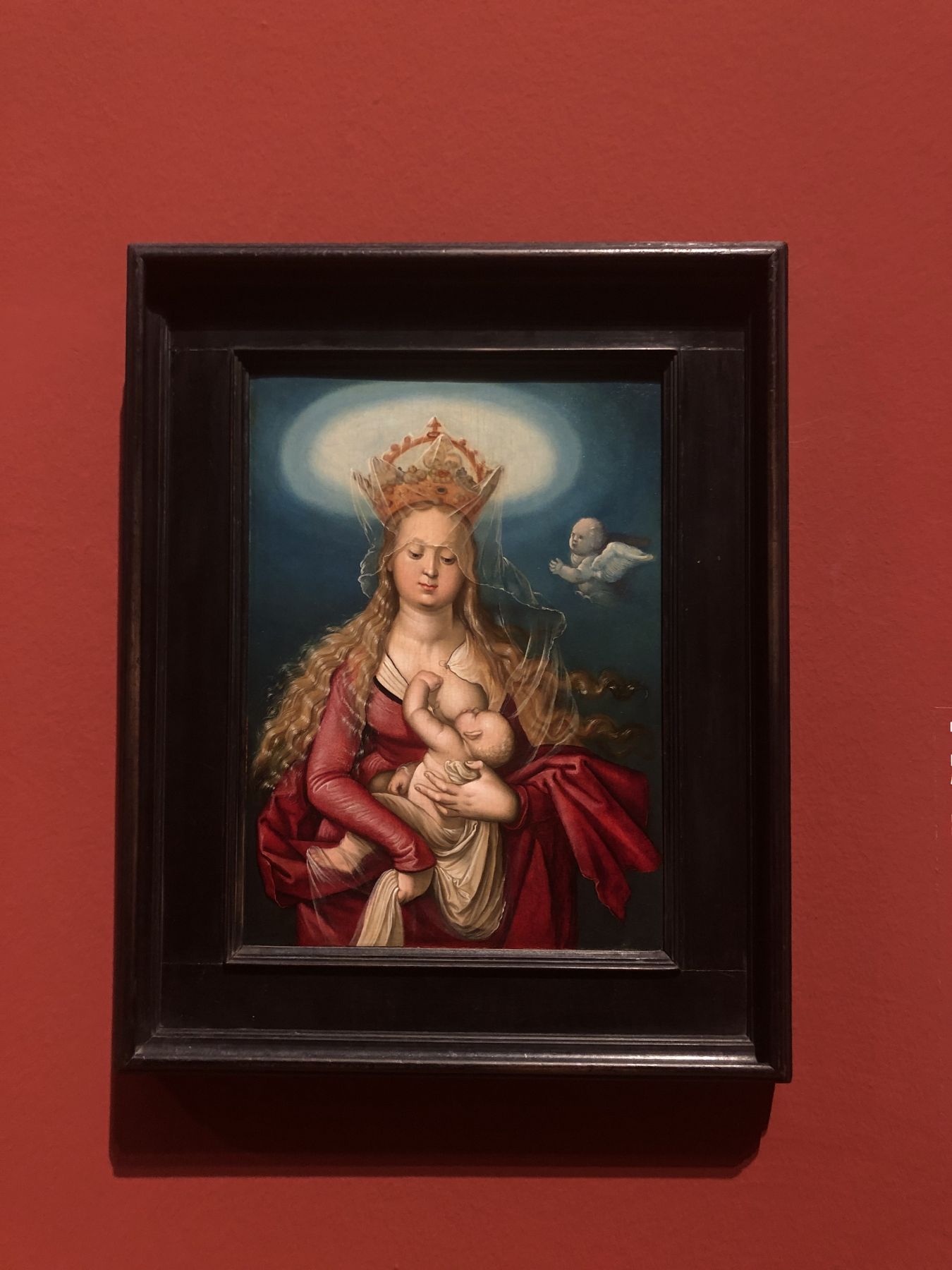 Overall this was an exemplary monographic exhibition: tastefully installed, with an intelligent, understated use of technology. Curiously, German museums encourage photography for special exhibitions but there are still exceptions. We were slightly annoyed that the reunited elements of the Mass of St Gregory altarpiece could not be photographed together as the central panel from Cleveland cannot be photographed by the public. Hans Baldung Grien: Sacred | Profane gathered together a remarkable critical mass of 60% of the artist’s oeuvre from over 60 different collections. Too often one leaves a monographic exhibition liking the artist less than when one went in. That was not the case here. The organizers had discussed a partnership with the Metropolitan Museum, but the difficulties of getting loans of fragile panels and works on paper to an exhibition on both sides of the Atlantic precluded this. On the other hand, Karlsruhe did partner with the French government (Karlsruhe is only 20 kilometers from the French border and Baldung died in nearby Strasbourg). So, the catalogue is published in French as well as in German.