Lockdown does funny things to time. On the one hand, days merge into one another at shocking speed, rather as I imagine they do for long-sentence prisoners. On the other hand, time stretches out so that ten weeks come to feel like ten years.

The 9th March seems another age. We watched an unexpectedly authoritative and impressive Giuseppe Conte, the Italian prime minister, speak to the nation and to our surprise, we all obeyed. From one day to the next, the streets of Turin emptied; shops, restaurants, museums, theatres and cinemas shut; travel ended. “Io resto a casa” (I stay at home) became the patriotic slogan, backed by the tricolore flag hung from balconies.

What affected me most was the silence. You could count the cars, so few drove down our cobbled street. We were allowed one outing a day for our health and every day I walked through deserted squares looking like a Metaphysical De Chirico to linger under the arcades of the Teatro Regio, with its loudspeakers playing opera into the void. It was my own personal concert by an imagined crowd of musicians (when would we be a crowd again?). It was like visiting a monument from the past, a promise for the future.  Art suspended. Down, but not out. 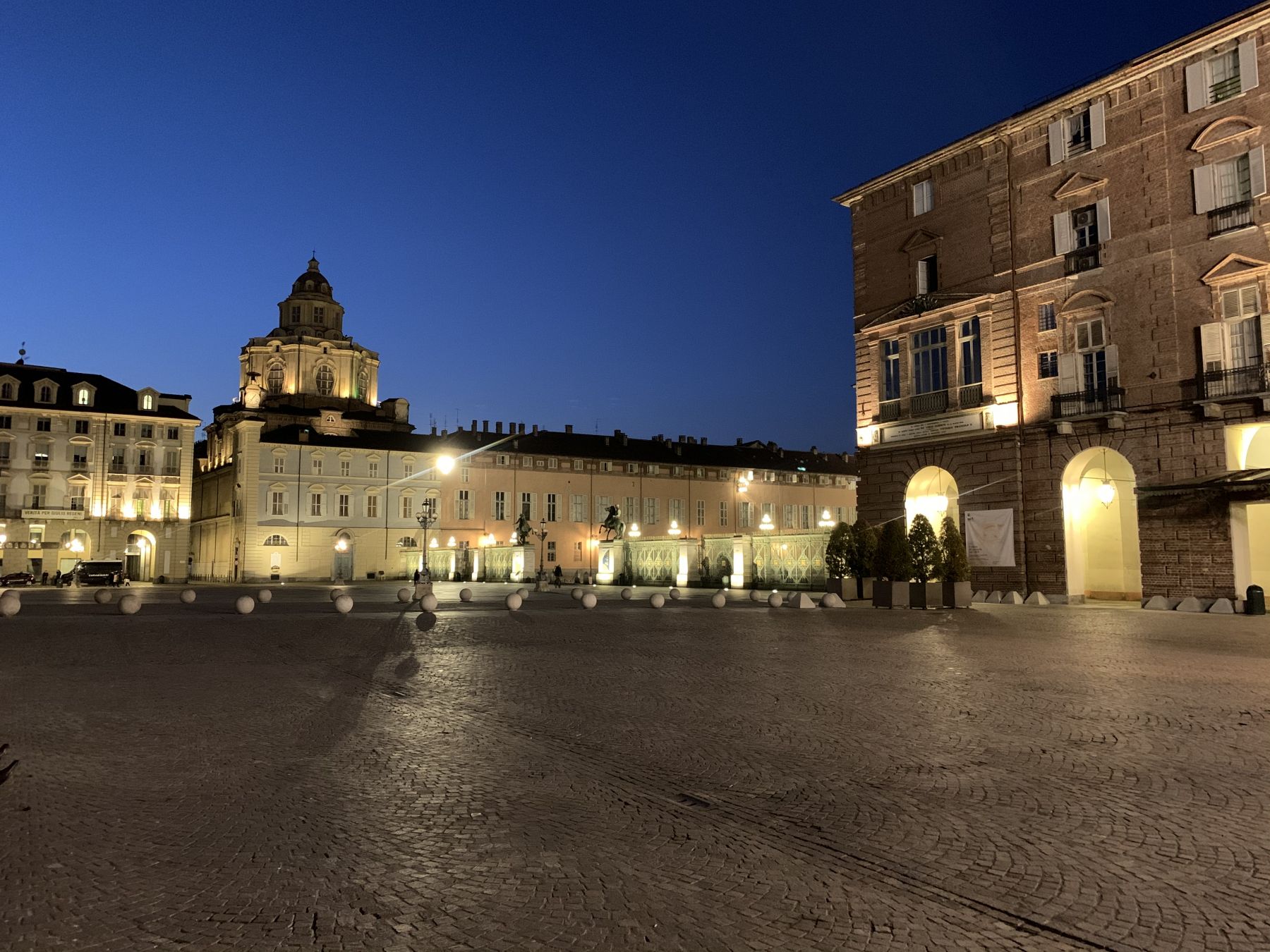 Piazza Castello, Turin empty at night photographed by the author

All over Europe, art was hanging in the dark. The show I felt was most wasted was the once-in-a-century Raphael exhibition in Rome’s Scuderie del Quirinale, the centrepiece of this Raphael quincentenary year. There seemed a very good chance that it would never be seen by the public, but it is now open (Italy entered its “second phase” on 4 May) and the international lenders, many of whose museums are still locked-down, have sensibly extended their loans until 30 August.

Italy has been very backward in digital matters, its cultural institutions included, but Covid-19 has forced them modernise, so this will be one of the goodish things to come out of the pandemic. I confess, though, that I did not turn to even the most sophisticated virtual tours of museums and galleries to amuse or, perish the thought, improve myself.  In this new simplified existence, what I craved was direct sensation, authenticity, sumptuous music (the “Rosenkavalier” from the Met will remain with me for life) and rich, familiar words. I took to reading poems in my son’s prep-school anthology, the only English poetry book I happened to have here in Italy: “In Xanadu did Kubla Khan a stately pleasure dome decree…”, “Half a league, half a league, half a league onward”…”Glory be to God for dappled things, for skies of couple-colour as a brindled cow”…

At the neighbouring plague column erected to commemorate the cholera epidemic of 1832, people left roses, but not many. In past plagues there would have been masses and processions with wonder-working works of art, but now, for the first time since Saints Peter and Paul came to Rome in the time of Nero, no liturgies were taking place with a congregation.

The Church did not give up, though. I would like to know who the pope’s theatrical director is, because it was pure drama that evening on 27th March when he came out of St Peter’s, alone under a dark blue sky and in the driving rain, to bless the world and the city (Urbi et Orbi—the blessing that popes usually only impart at Easter and Christmas),  with Bernini’s colonnade in front of him, merging into the emptiness.  It was shown on TV and even sceptics were moved. 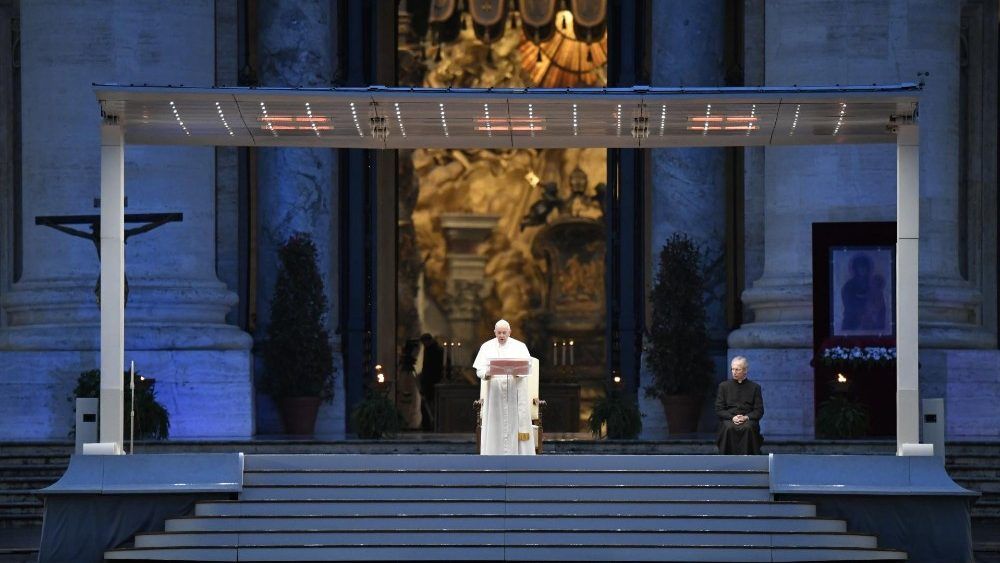 I noticed two works of art behind him, by the entrance to St Peter’s, a crucifix and an icon, and knowing that the Vatican does not do anything by accident, I looked up what they were. They were a late 14th-century Christ crucified from the church of San Marcello on the Via del Corso, and a famous Madonna and Child known as Maria Salus Populi Romani (Mary salvation of the Roman people) from Santa Maria Maggiore, both with a powerful thaumaturgic history.

Ever since I was at the Courtauld Institute and then at the Victoria & Albert Museum, I have thought that it was diminishing to look at religious works as just another aesthetic experience or tessera in the history of art when once they had a numinous aura.  I remember the outrage of curators at the State Russian Museum in St Petersburg when they caught people kissing the icons, which was bad for their conservation, of course, but I could not help feeling at the time, the early 1990s, that a piece of important territory was being reclaimed.

So here, in front of the basilica, were two works of art being used for their proper purpose, and, predictably, conservators howled because they were getting a little wet. The crucifix on the left of the entrance was nothing special in history-of-art terms, one of hundreds of workmanlike sculptures whose craftsman we will never be able to identify. As a miraculous object, on the other hand, its fame was established in 1519 when it escaped a fire that destroyed the church, since rebuilt, and then, in the plague of 1522, it was carried in procession around Rome for 16 days, at the end of which the disease died down.

The icon on the right of the door was of more interest to art historians. Of a Byzantine type called hodegetria(she who shows the way), its dating used to vary wildly from early Christian to early medieval, but science has killed the speculation. Radio-carbon analysis carried out while it was being conserved by the Vatican in 2017 dates the wood with 80% certainty to between the late 9th and early 11 centuries, while the painting itself is close to pictures known to have been made in Rome in the 11th and 12th centuries. 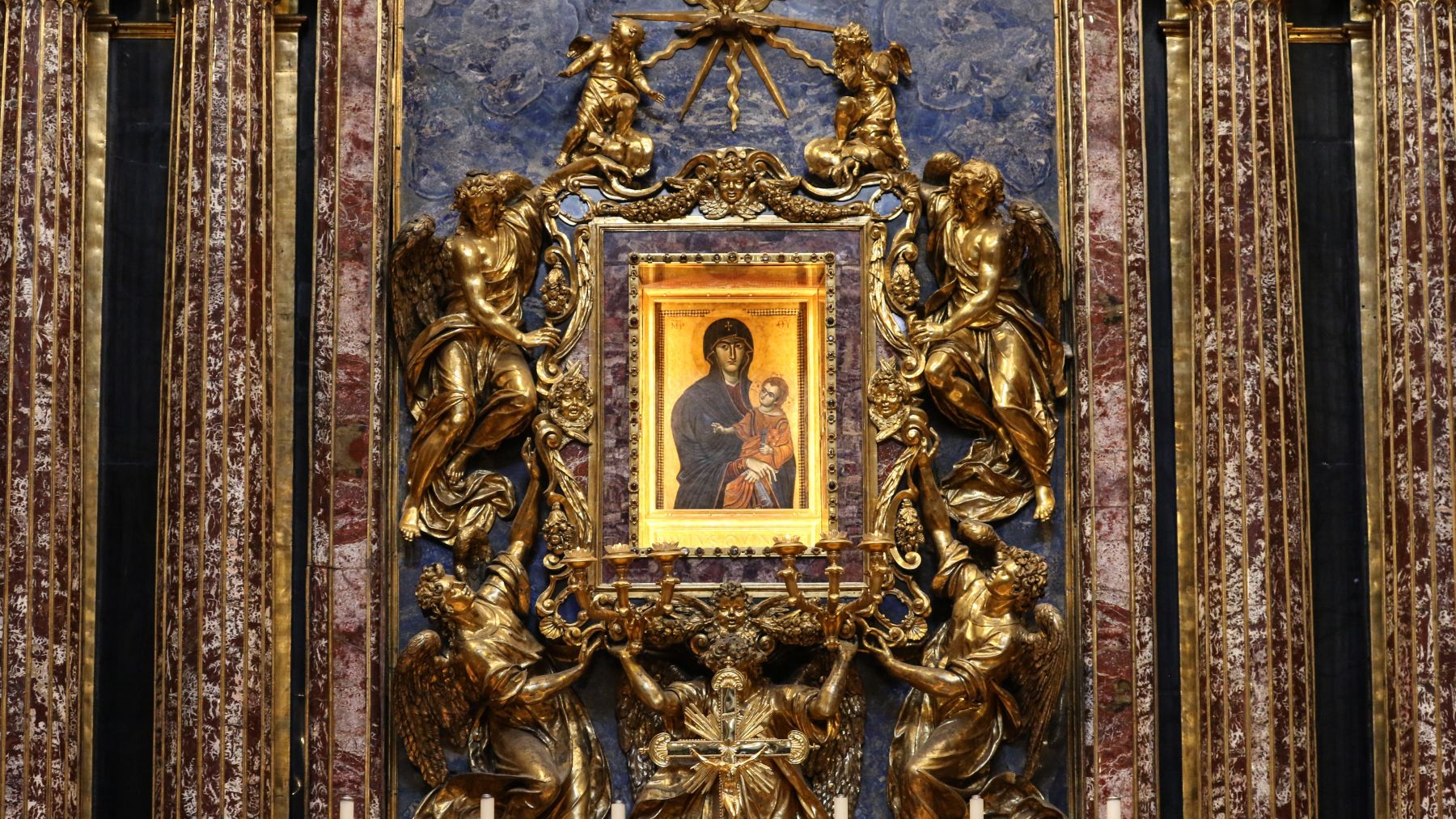 For centuries, it was Rome’s most venerated image of the Virgin, considered from the 15th century at least to have miraculous powers and its most glorious historic moment came in 1571, when Pope Pius V prayed in front of it before the decisive victory over the Turks at Lepanto. In 1834 it was invoked by the pope during the cholera epidemic, so its presence that evening in March was carrying on a long and great tradition in Roman popular belief.

It is not just that we do not live anymore in an age of faith—or superstition, as some would say. It’s that we have taken such works, good, bad or simply marvellous, out of their context, where, inevitably they not only look different, but we are compelled to apply a completely different value system to them, one that actually denies their reason for existing.  Compare seeing Raphael’s Sistine Madonna on the plain walls of the Dresden Gemäldegalerie with standing at the door of the Frari in Venice and looking up the aisle at Titian’s Assumption of the Virgin above the high altar and you will feel what I mean.

But something very surprising has just happened. As I was writing this, Eike Schmitt, the German director of the Uffizi gallery, told a room full of journalists that he thought it was time that museums sent many of their religious paintings back to the churches from which they had been removed.  I doubt that he was thinking primarily of their religious aura, but he is acknowledging the simple fact that they belong there more than in the hygienic, well-lit, air-conditioned rooms of any museum. Expect a big row, but I think this is something of turning point. 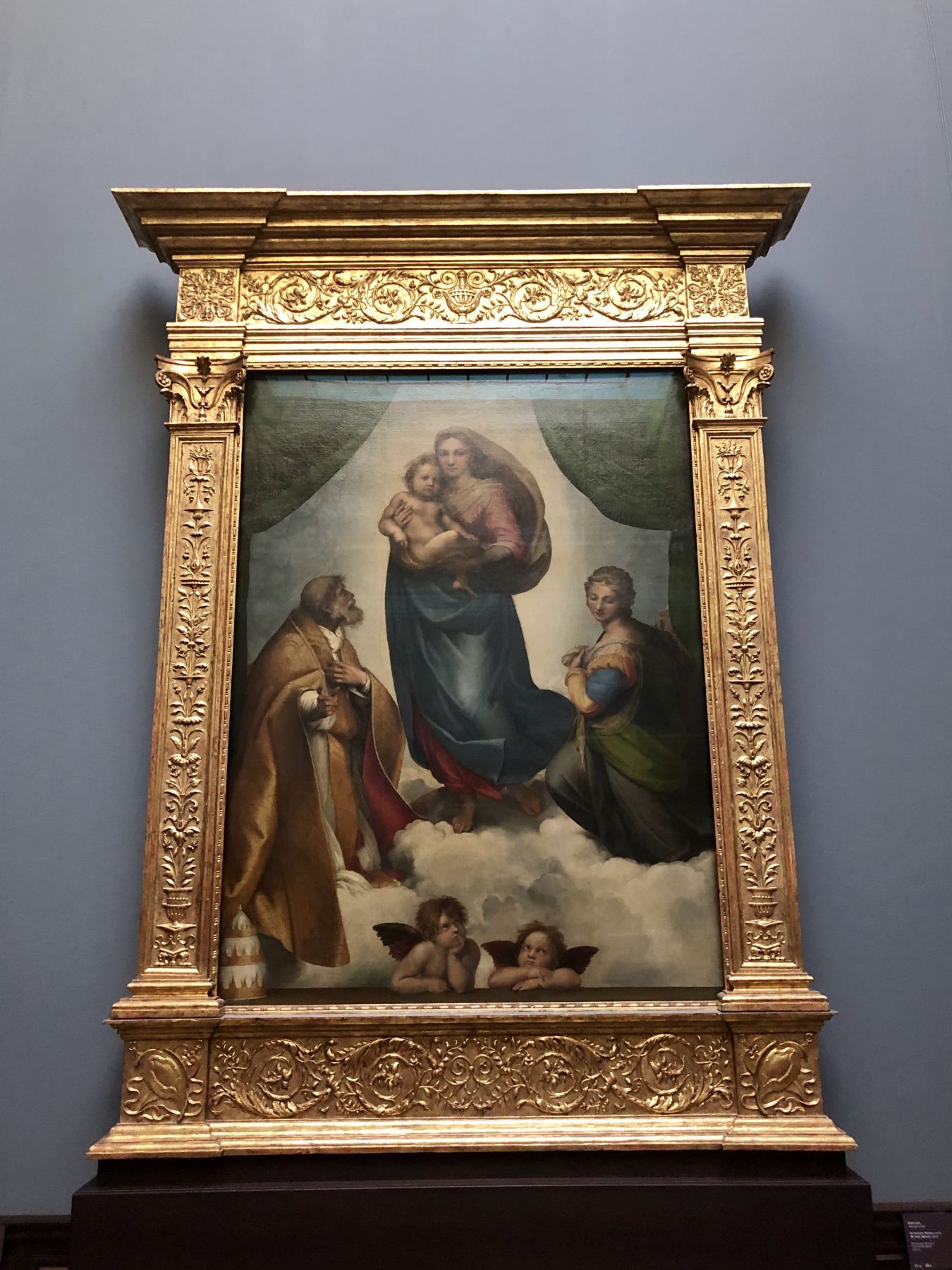 Anna Somers Cocks was the founder editor-in-chief of The Art Newspaper. Before that she was a curator at the Victoria & Albert Museum and then editor-in-chief of Apollo magazine. She was the chairman of the Venice in Peril Fund for 12 years and campaigns for the preservation of the city.