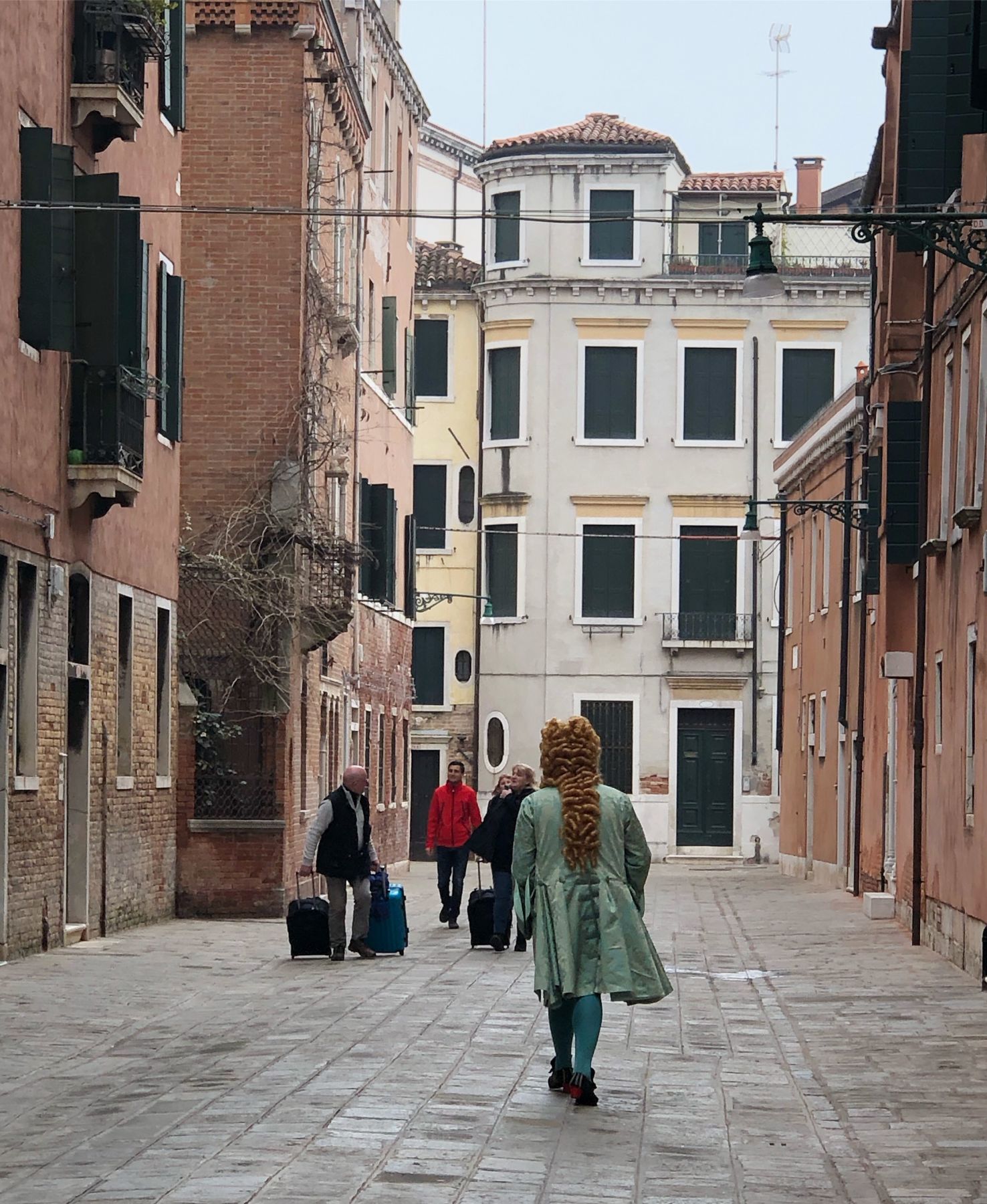 Venice during the Carnivale
© Yuan Fang 2019

Venice contains multitudes. I mean this both literally (our current predicament notwithstanding) and in the sense that Walt Whitman meant: it’s a place of potentially endless combinations of meanings, open to anyone to reshuffle as they wish. Those who hate Venice, and there are a good number of them, do so for a limited number of reasons, usually (1) the smell (2) the crowds or (3) the food. All of these complaints amount to the same thing, which is that the complainer chose the wrong time of year to go, didn’t do their homework, and didn’t deviate from the single pedestrian route that runs from St Mark’s Square to the train station. People who love Venice (I am one of those people) love to point out that there are areas of the city that are village-quiet even in the depths of summer; that Venetian food doesn't have to break your heart; and that tourists don’t see the real Venice, as though they weren’t themselves obviously tourists, as though reality is distributed according to need. And yet both are right. As Mary McCarthy pointed out, in Venice Observed (1956), nothing can be said about Venice that has not been said before, including this statement (and, of course, this very essay). But it’s in that sense that I have been rethinking some of my favourite works of art in the city, all of which are in the same place they were made for, many hundreds of years ago. 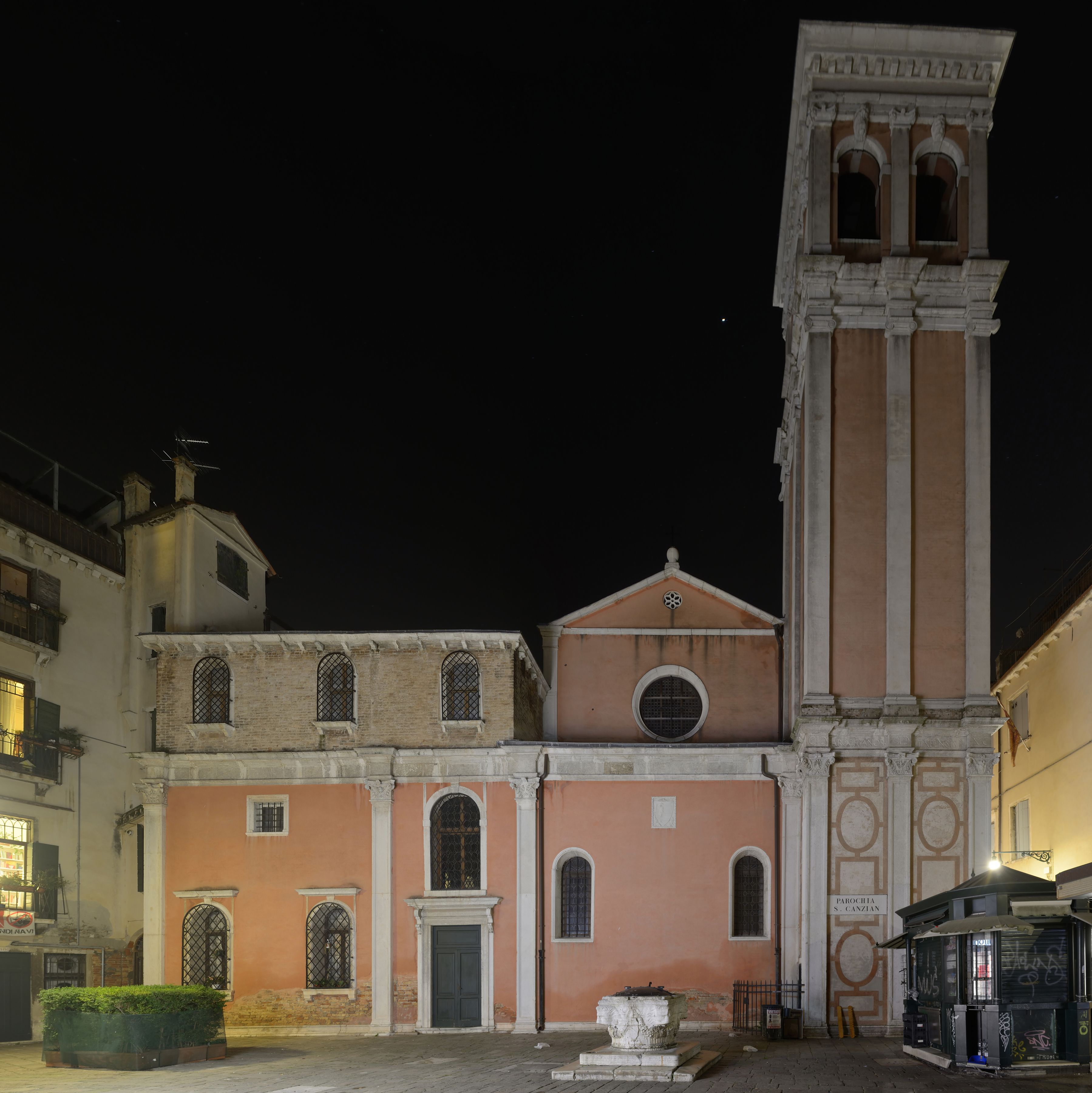 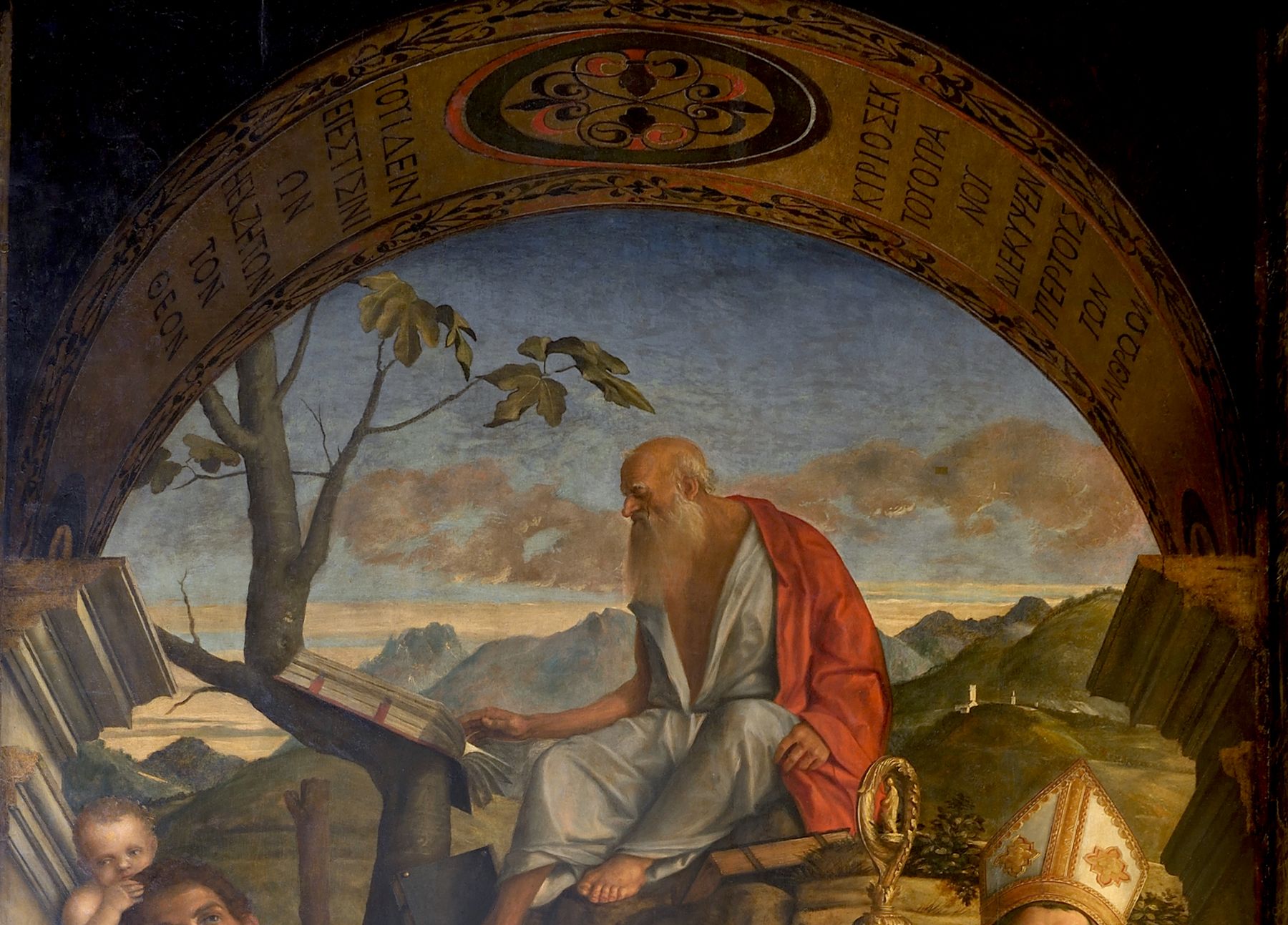 It’s not the same place, though, of course. When I give directions, which I often do, to the church of San Giovanni Cristostomo, a church which contains a painting that has its own wing in my imagination, it’s via a string of business names that were undreamt-of when the church itself was built: Disney, Stefanel, Coin, Grom. Google Street View accurately shows the route as thick with pedestrians, even though the photos used are clearly from different times of year, judging by the outfits. Sitting as it does on one of the city’s main arteries for visitors and residents alike, the church is much passed-by, much not-looked-at. It might, if you were belting along towards or away from the Rialto Bridge – and you’re always doing one of those two things in Venice – be taken, in the eye’s corner, for just another part of the same street. But break the flow and step inside, and you’ll notice the silence, the rush of cool stone lifting the heat from your shoulders. Now make your way towards the painting in the chapel on the right. 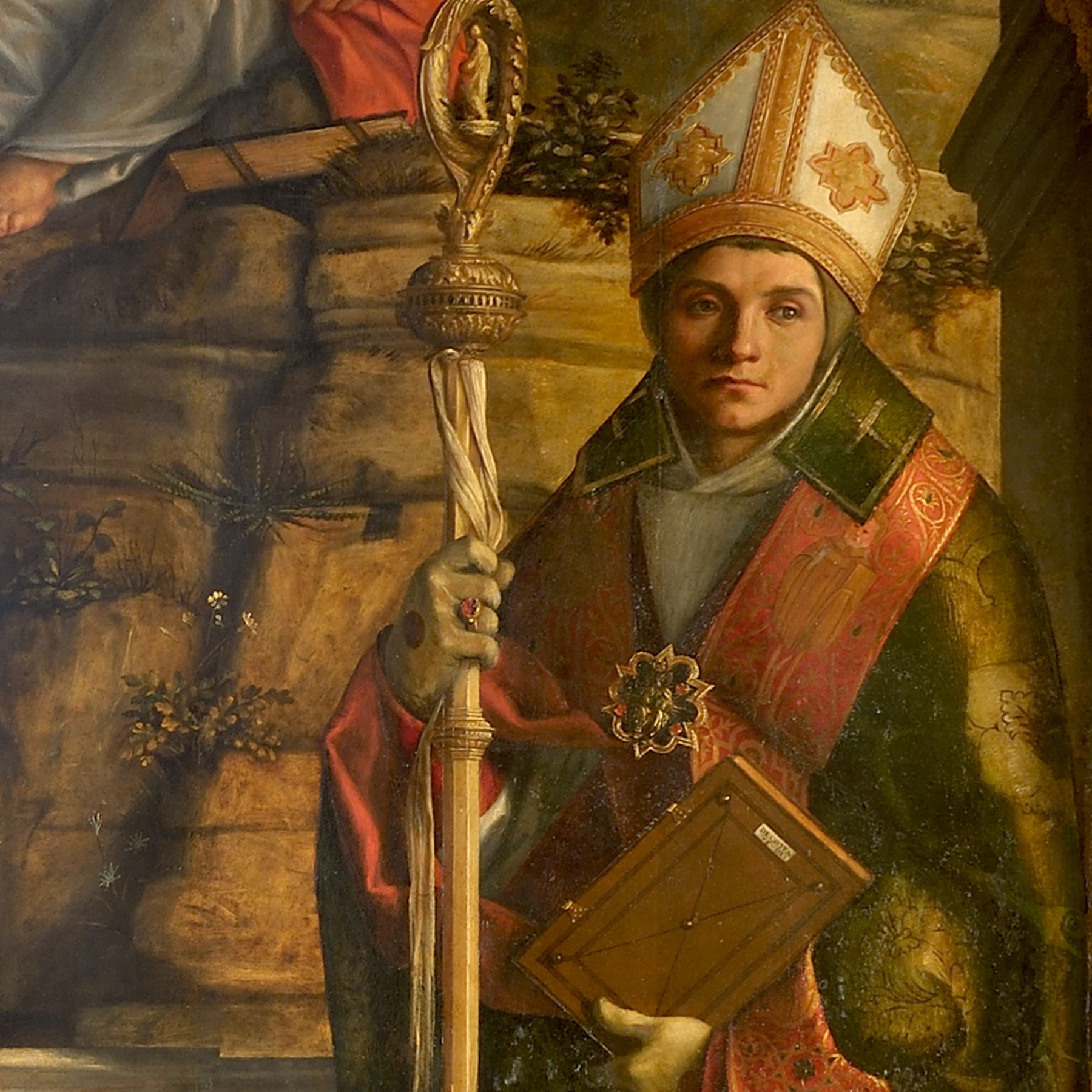 Detail of St Louis of Toulouse

I’m revisiting this painting and its particular position in that church and on that street entirely from memory and its attendant angel, Google, in order to think through an idea about paintings that may or may not be true. Or may, in the spirit of the city itself, be both at once. I am thinking that our thinking about paintings ought to be more porous, allowing the complex and contradictory world outside the frame to leak in a little. In the end, it’s about paying attention to the act of looking: the way our looking is framed through ever-shifting, ineffable, and often contradictory, modes of experience. Reproductions of works of art can never bring such things to mind. The difference between, say, standing in the small, dark, cool interior of the church, in front of this painting, and seeing the same painting as a projected photograph on a screen in a large, dark, hot interior of a lecture theatre, is one as unbridgeably great as that between the name of the city and the city itself.

A light switch suddenly illuminates the painting. Lamplight bounces off its undulating wooden surface, making it no easier to see. Every so often the door to the street swings open and lets in a shaft of light and noise. Three male figures are set inside an archway, whose inner curve, painted to resemble gold mosaic covered in Greek lettering, is there to position you, any given viewer, well below the figures themselves, who are, you read on the minimal label by the light switch, Saints Christopher and Louis of Toulouse. The tanned Christopher, with a long stick in his hand and a baby on his shoulders, might be any backpacker lost between the station and the fish market. Louis, dressed in his shimmering bishop’s garb, turns away a little haughtily, like one of those elegant women you see walking in Venice some evenings, a dog in a bag under one arm, avoiding the backpackers. Behind these two, a low marble wall marks a break between this world – of text and textiles, of quarried and cut stone, of Disney, Stefanel, Coin, Grom – and another. An unruly, plant-specked mound of rock rises up, and behind it, mountains, then a town, and then more mountains. The elderly St Jerome is there, reading, his open book resting on the natural lectern of a curved tree. His eye, dead centre below the apex of the arch, seems, I’ve always thought, to be closed. Giovanni Bellini, they say, was in his mid-eighties when he painted this, and so, obviously, he didn’t: he employed a team, with him hobbling (I imagine) around the studio overseeing the thing’s production, adding a mark here and there, demonstrating how best to suggest the pale blues and pinks of twilight, or the particular sheen of damask as it falls to the ground. It is unmistakeably his, though. The golden Venetian evening light with which his paintings are entirely illuminated does what evening light always does: it presages the end of something – a day, an event, a life.

There is another world, but it is in this one. Paul Éluard’s line has often seemed to me to be the most useful way of thinking about the nature of Bellini’s painted spaces. St Jerome’s is a parallel world, but it’s in this one: it’s right here, just behind the wall, just through the swinging door, right off the street. It is Venice itself – contemporary Venice, with its Irish pubs and string quartets, and cruise ship protests and photographic menus – that provides a means for this realisation to take place: that it is always by considering one thing and another, a painting and the world it sits in, that something approaching meaning might be found. 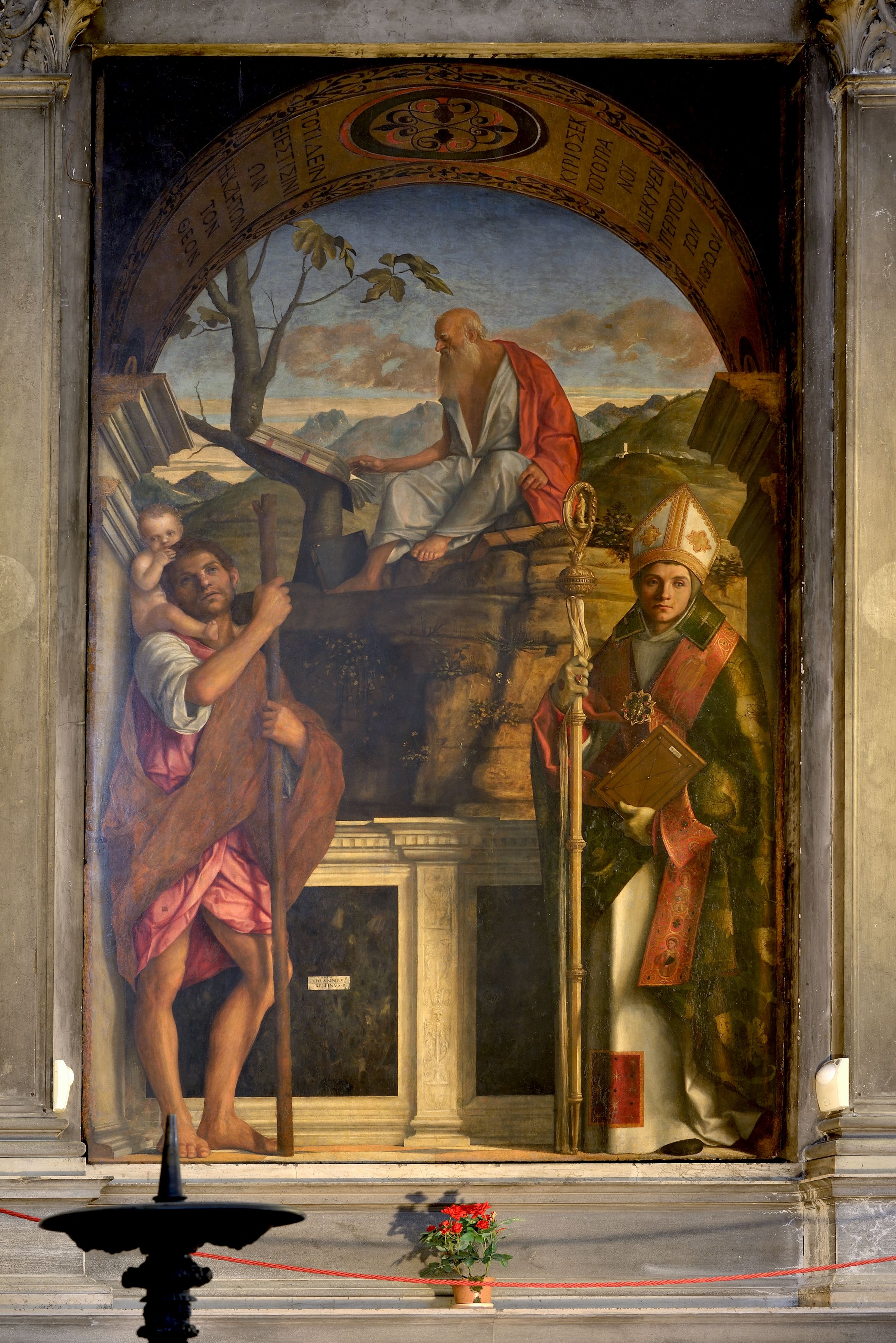 Saints Christopher, Jerome and Louis of Toulouse
in its original location in San Giovanni Crisostomo, Venice

Ben Street is an art historian, educator and writer based in London. He has lectured for the National Gallery, Tate, Dulwich Picture Gallery and many other institutions. He is the author of a book about the National Gallery, Art Unfolded: A History of Art in Four Colours, and is a regular contributor to Art Review, Times Literary Supplement, Art Quarterly and other publications.